There’s been a lot of anticipation over the past few months regarding the potential swell of the sublease market as organizations re-evaluate their need for physical office space during COVID-19...

At the beginning of the summer, there were articles discussing the potential for a surging office sublease market due to the rise in remote work practices and anticipation of an economic downturn because of the coronavirus pandemic. Speculation on this front in Ottawa had started a month earlier when Shopify announced the closing of their offices until 2021 and, at the end of summer, Shopify became the centre of the discussion again choosing to put their 150 Elgin St. headquarters up for sublease.

Real Strategy Advisors believes that such an increase in sublet availability would be a leading indicator of a reduced need for physical space that could potentially result in a long-term and persistent reduction in tenant demand. When there’s too much remaining term or it’s too expensive for an organization to do a lease buyout, many office tenants will put their space on the market for sublease as a way to reduce unnecessary expenses. Thus an uptick in the available office space for sublease, during a time when demand is low, means that there will be more space chasing fewer tenants.

Real Strategy is beginning to see confirmation of this previously presumed sublease trend with recent data from CoStar Group. In terms of the total sublease availability in the city since the beginning of 2019, the percentage and sheer amount of square footage have more than quadrupled. 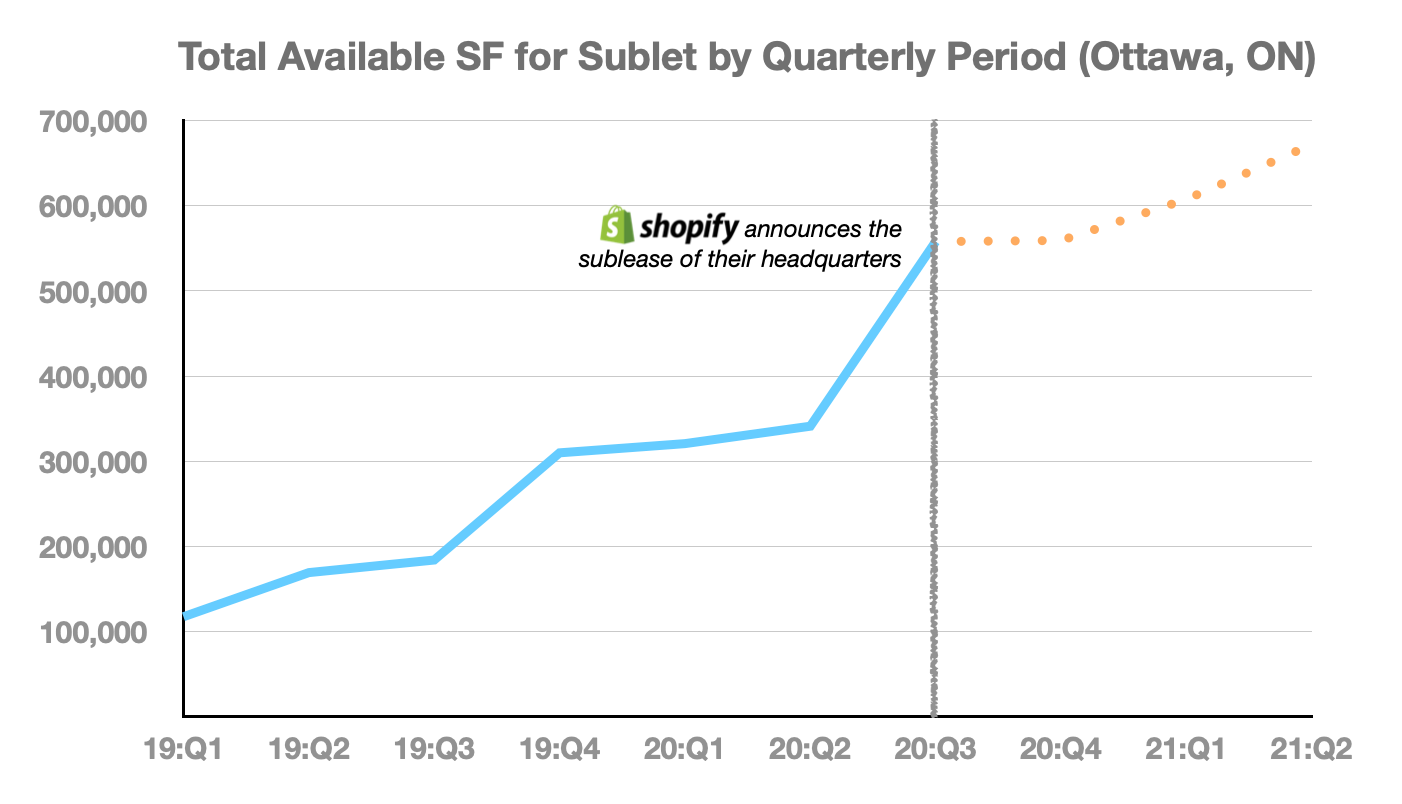 (Based on data provided by CoStar Group)

If this trend were to continue, it’s not hard to imagine a case where the total sublease availability numbers could approach and cross into 700,000 SF towards the end of next year. Although there are those that have remained confident that there won’t be an overly dramatic change in the demand for quality office space in Ottawa, and that the raw numbers for sublease availability aren’t as comparable to those during the early 2000s for example, the patterns and stories starting to emerge seem a little too familiar.

In our piece on When the Bubble Burst, Real Strategy noted on how JDS Uniphase and Nortel ended up having to get rid of their respective headquarters and campuses after the high-tech crash (later to be occupied by RCMP, DND, and other government departments). We also looked at some trends that didn’t emerge until into the 2010s and how the real effect of The Great Recession wasn’t truly seen in the commercial real estate sector until then, mainly:

It may be the case that Shopify and other tech companies in the city aren’t in the same dire positions that JDS and Nortel were previously, but this time…

There’s no government impetus to swoop in and and grab up all of the space. The current transition is a unilateral one where all office-based organizations are re-evaluating their need for space and trying to create processes that accommodate remote work along with a partially staffed in-office option.

This isn’t just a case of economic correction that needs solving. Until there’s a massive change in the way we work or a cure for COVID-19 that allows us to go back to the office ways of old, this sublease availability trajectory will continue to be seen and eventually turn into vacancy. As we observed in other cases of other economic recessions, an increase in vacancy means a decrease in rental rates alongside increased cash inducements and “extras”. We at Real Strategy Advisors have already started to see deals and concessions made that wouldn’t have been dreamed of prior to the pandemic.

We caught up with Aman Chowdhary (Senior Market Analyst at CoStar Group) who believes that Ottawa’s sublet situation is a “reflection of the uncertainty brought about by COVID-19”. He does not think that offices will become obsolete, but did state that “the new normal for tenants in the National Capital Region will likely become an ecosystem of a variety of locations rather than a single space”.

Speaking on vacant sublet space in Canada as a whole, Aman also said that since “return-to-office dates are being pushed out to winter or even summer 2021, it is likely that the amount of sublet supply will continue to increase”. In agreement with what we’ve been predicting at Real Strategy, he also thinks that the lessened demand and transaction activity will result in “downward pressure on rental rates that will likely intensify over the next several quarters”.

Market conditions and rental rates are always changing in the current climate. Sometimes the best savings do not present themselves until later when landlords have sat with and realized where things are headed. This is where an experienced advisor and broker comes in — like us! Contact Real Strategy today and let us provide a market analysis or market-test your current agreement so you know what options are available to you.